Since our foundation in 1717(Kyoho 2nd year of the Edo period), we have fully committed to the pharmaceutical business, under the corporate philosophy “Dedicated to the Fight against Disease and Pain”. In FY2021, we have newly established sustainable management policy, to realize a sustainable society. 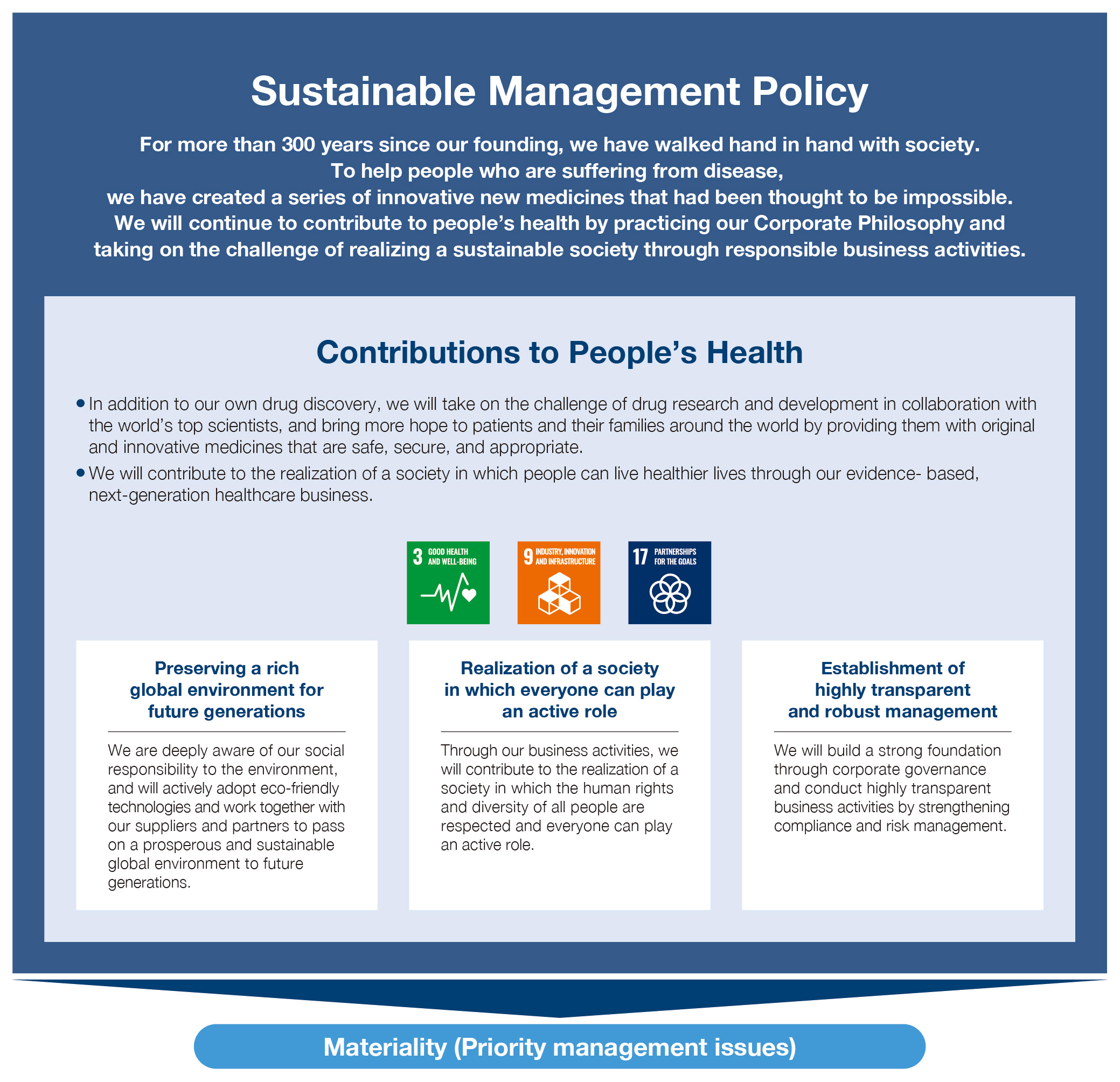 ONO has striven to develop our CSR by defining important areas of focus based on ISO 26000. In FY2018, we redefined our materiality as “important CSR issues” to clarify CSR activity themes that we should emphasize. ONO is actively engaged in CSR in accordance with the materiality that we have established.

Integration of “Management Issues” and “Materiality”; to Realize a Sustainable Society and Business

In FY2021, based on the newly established sustainable management policy, we changed the materiality from “important CSR issues” to “important management issues” to analyze and manage financial and non-financial management issues in more integrated way. The materiality thus defined has been clearly linked to the strategy of the mid-term management plan and has been developed into a more dynamic management system.
We believe that the disclosure of integrated financial and non-financial information and dialogues will be possible so that stakeholders outside of ONO can understand our sustainability initiatives. 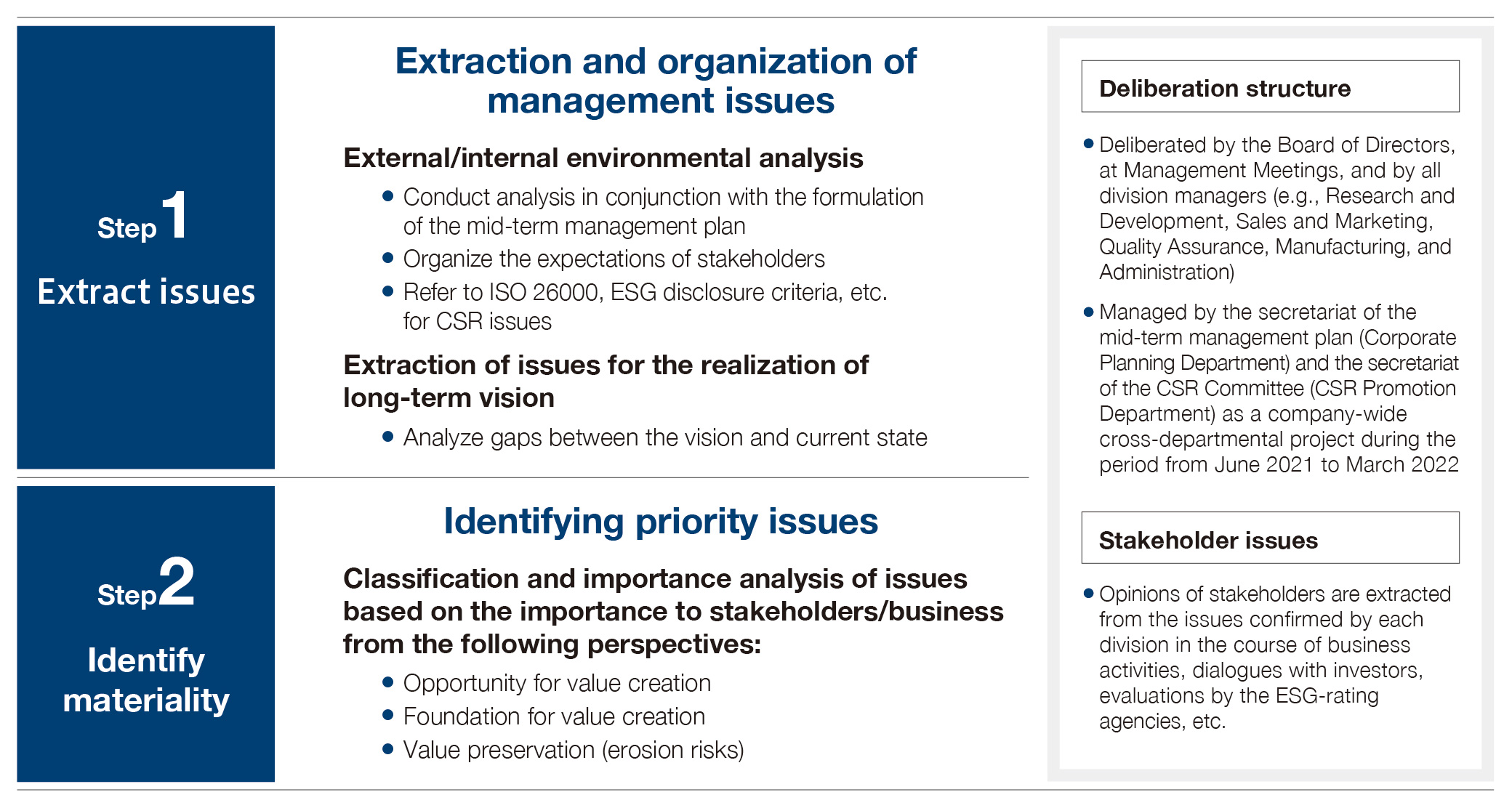 In the materiality analysis conducted in FY2021, we conducted a management environmental analysis in conjunction with the formulation of the mid-term management plan to extract potential management issues. This analysis identified important opportunities and risks for creating value and achieving sustainable growth of our company. Our directors, executive officers, and senior management from all divisions participated in the external/internal management environmental analysis, which included analysis of the management environment surrounding the business and analysis of gaps between our long-term vision and current status. In addition, management issues were extracted based on requests and expectations of stakeholders that were confirmed by each division in its daily business activities. As for non-financial issues, we extracted issues related to intangible assets such as human capital and intellectual capital that are needed to realize our growth strategies.
Non-financial issues were updated based on ISO 26000, the GRI Standards, the SASB Standards, the Ten Principles of the United Nations Global Compact, evaluations by ESG-rating agencies, dialogues with investors, etc. Analysis of issues was conducted while the progress of deliberation was reported to and confirmed by the Board of Directors.

In identifying materiality, we first classified the issues extracted in Step 1 into “value creation,” “foundation for value creation,” or “value preservation (erosion risks).” We recognized that “value creation” and “foundation for value creation” are opportunities and “value preservation” is a risk for our company. Furthermore, at the Management Meeting and other occasions, 18 materiality issues were defined as the most important issues from the perspective of importance to stakeholders and business. Materiality issues were deliberated and finalized by the Board of Directors. 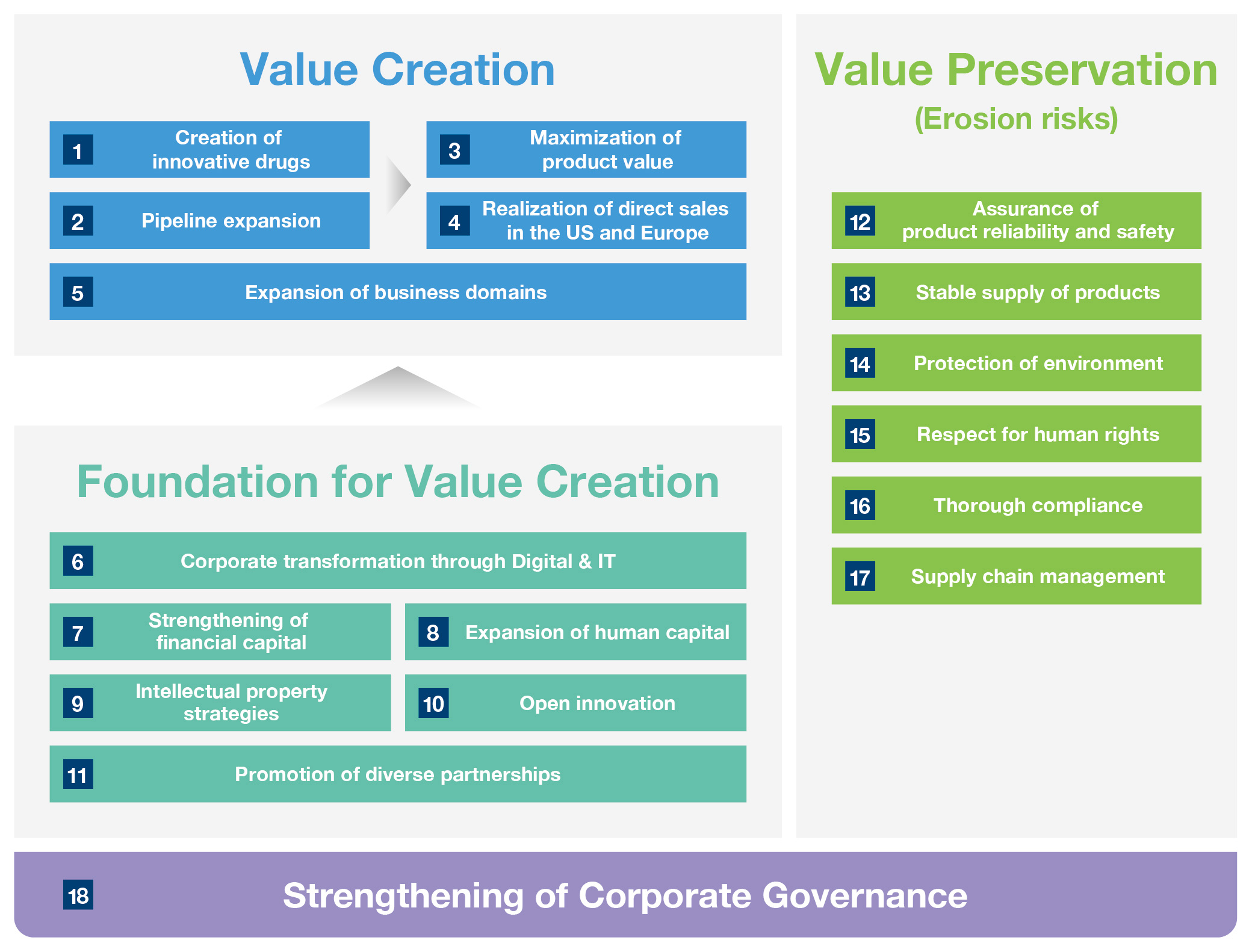 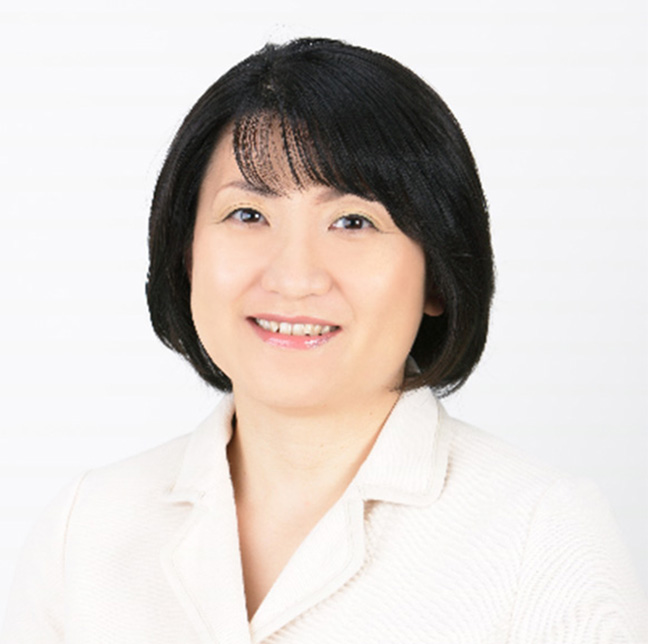 This materiality analysis is conducted in ONO’s way and is very forward-thinking. In the previous materiality analysis, a general biaxial materiality map was used; however, this time, it is going beyond the existing framework and creating a more satisfactory examination process at ONO. ONO conducted and compiled a radical analysis in its own way. It is excellent. Other companies will likely use it as a reference.
In addition, issues that bring a sense of satisfaction are defined even from the perspective of whether the corporate philosophy "Dedicated to the Fight against Disease and Pain” can be achieved by engaging in the materiality identified this time.
What ONO should strengthen in the future is to include global awareness and perspectives when aiming to be a global specialty pharma. The following two points are noted when assuming overseas audiences:
The first point is whether global and high-interest themes are fully identified. Particularly in the US and Europe, the topics of interests are the wealth gap, medical access, diversity and inclusion, and industrial safety and health, etc. While ONO is developing globally, it is necessary to acknowledge the issues that overseas stakeholders acknowledge, now more than ever.
The second point is clear communication to show the attitude of a “challenger” that ONO put forth in its Mission Statement. For example, in the expression “protection of environment,” it is difficult to communicate ONO’s aggressive features to become a leading environmental company in the pharmaceutical industry. Therefore, more proactive communication is important with overseas stakeholders.
It will be more important to include the expectations of overseas stakeholders in the future, and it is better to reflect the opinions of overseas employees, now more than ever. 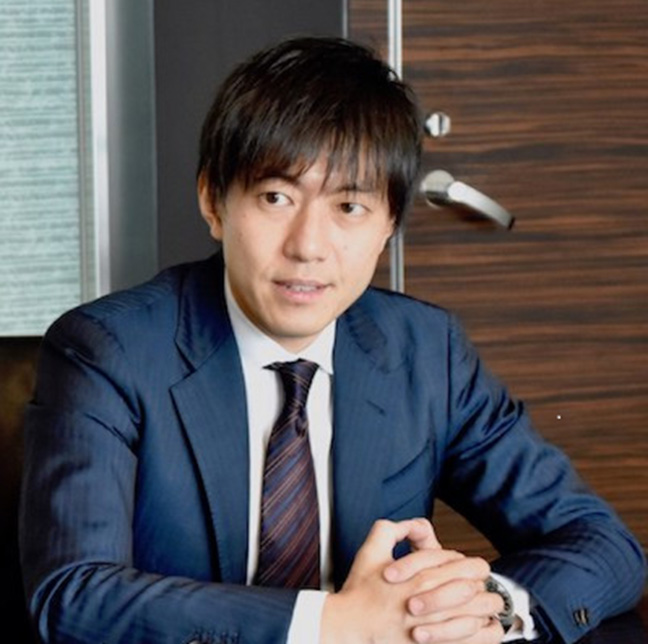 ONO has grown steadily towards expected integrated materiality.
In the future, the establishment and management of goals as well as disclosure and communication will be more important. Kenji Fuma
Chief Executive Officer,
Neural Inc.

The position of materiality has changed from major CSR issues to management issues in which financial and non-financial matters are combined. This shows that ONO has overcome the previous issues and made major progress. The materiality analysis procedures are also appropriate. It was excellent to see that ONO, including management members, verbalized the issues, and examined why the issues were important to them. In addition, it is also highly appreciated that ONO examined them in consideration of how non-financial issues influence future financing.
At the same time, ONO should be careful when engaging in communication outside the company in the future. The number of groups with major issues that are included in the “Foundation for value creation” and “Value Preservation” among the materialities identified at this time is large and there is a wide variety of such groups. For this reason, stakeholders may have concerns as to whether ONO can really manage these issues or whether the issues are narrowed down to truly material issues. When disclosing information outside the company, it is important to present medium-term goals that can satisfy each issue and to give explanations of the management methods that are being strengthened more than ever.
In addition, in the new materiality, issues are listed in large categories, such as “Thorough compliance,” etc.; however, stakeholders would like to know what specific materiality issues are included in each category. In particular, investors communicate with companies on the assumption that themes such as corruption prevention, the protection of personal information, etc., are included among the major issues, and are interested in how far ONO is going to progress activities for these themes, etc. Therefore, it is preferable that companies can disclose the information and provide careful explanations.
Materiality analysis is progressing in the expected direction. In order to achieve strategic goals for value creation, it becomes important to engage in non-financial issues integrally and to strengthen communication outside the company year by year.

With regard to each materiality issue that was redefined in FY2021, we will establish mid-term targets and plans, and confirm the progress. Furthermore, in conjunction with the mid-term management plan, each issue will be linked to a corresponding division, organization, and committee, and a company-wide PDCA management cycle will be established and managed by the Board of Directors and via Management Meetings.
Please see below for reason for being a priority issue, targets and actions for each materiality. Progress toward the targets will be disclosed every fiscal year starting with the results in FY2022. 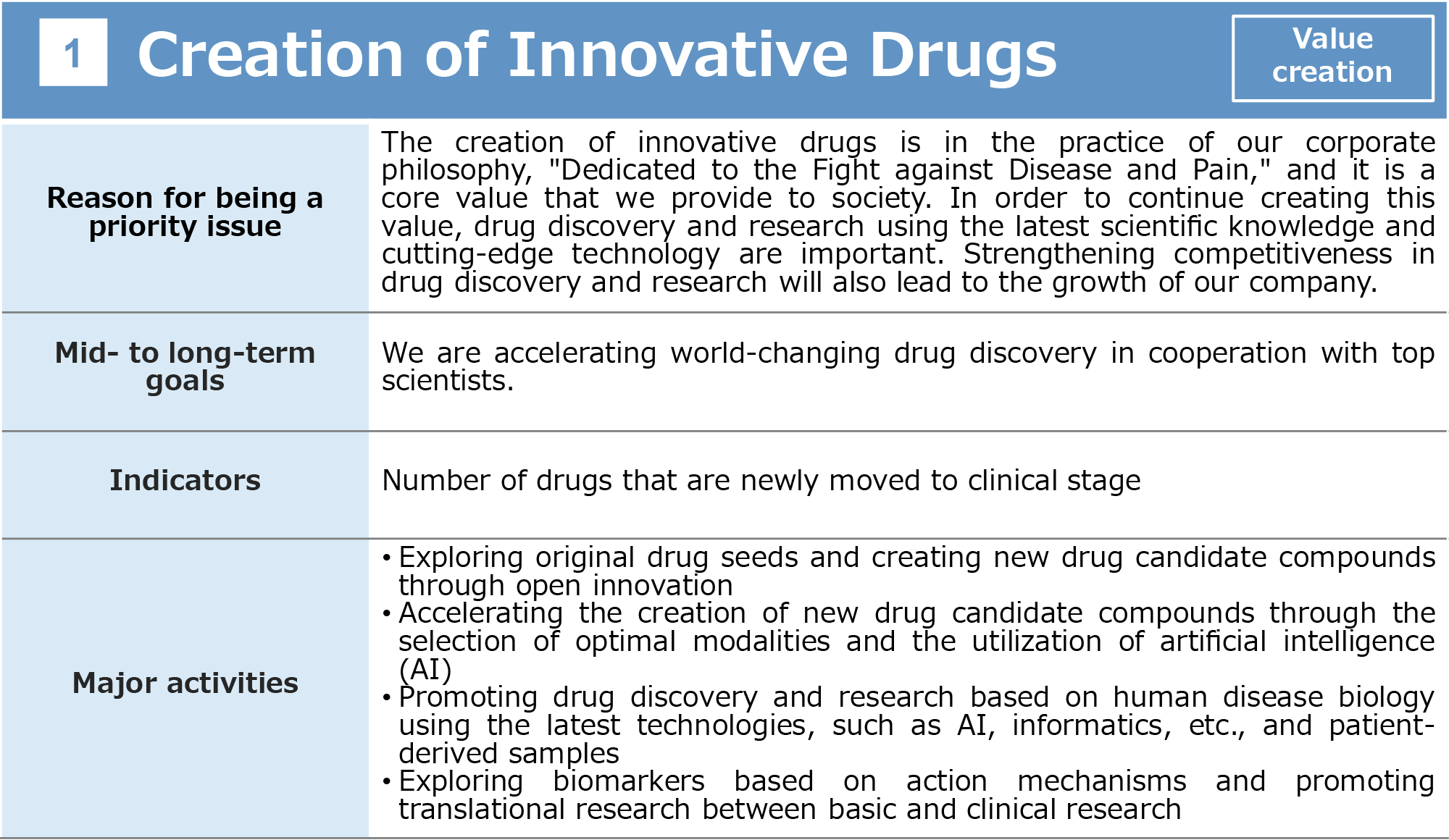 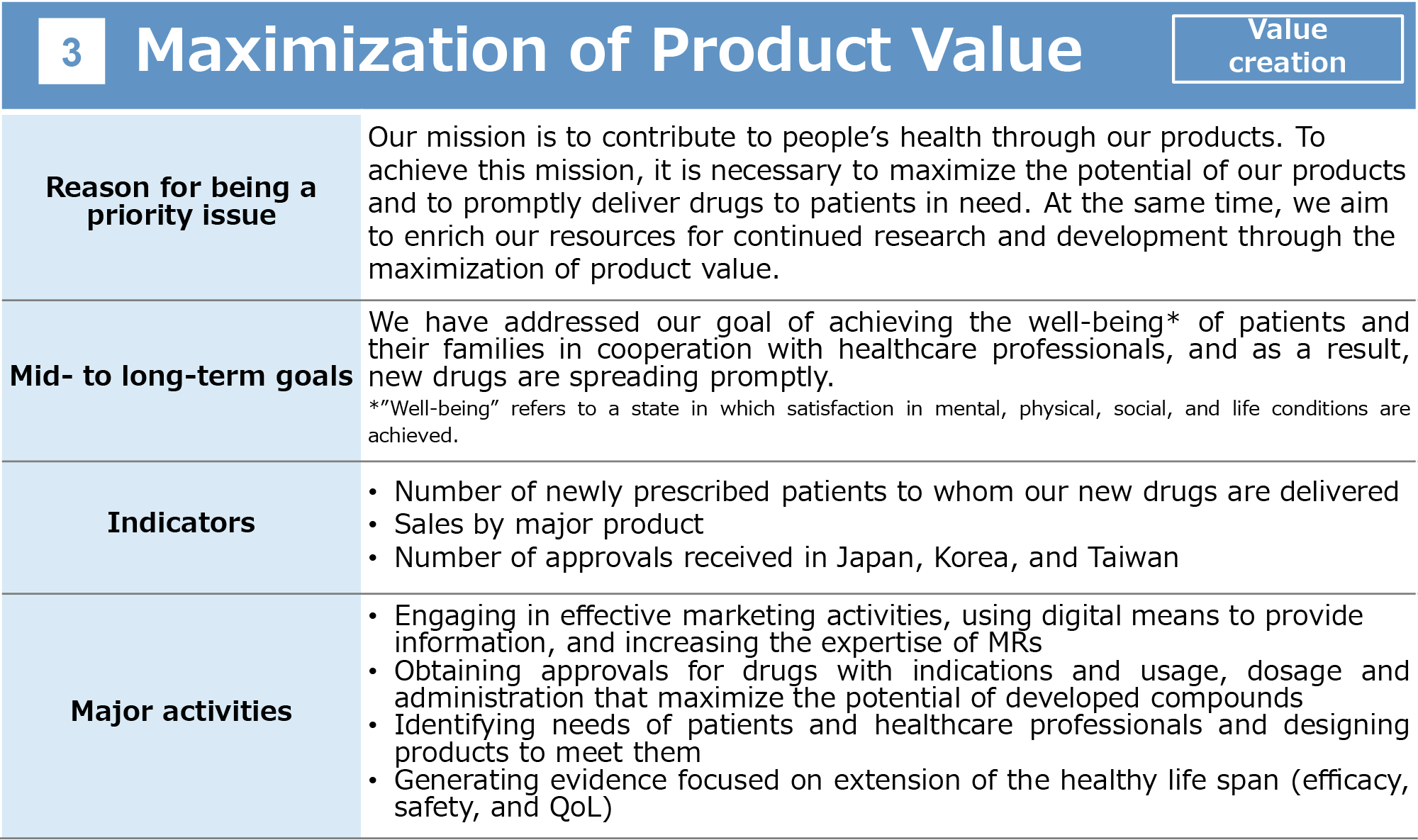 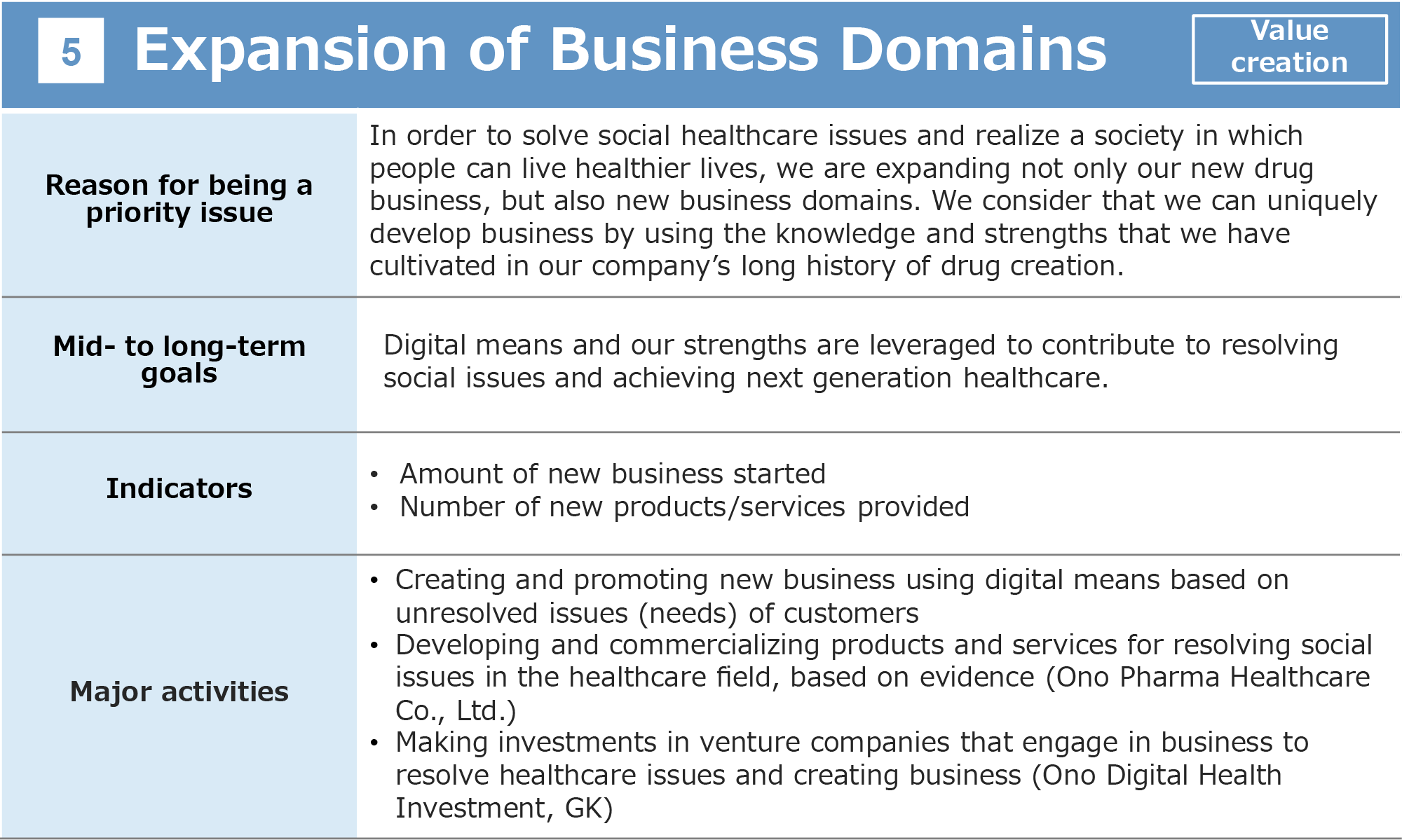 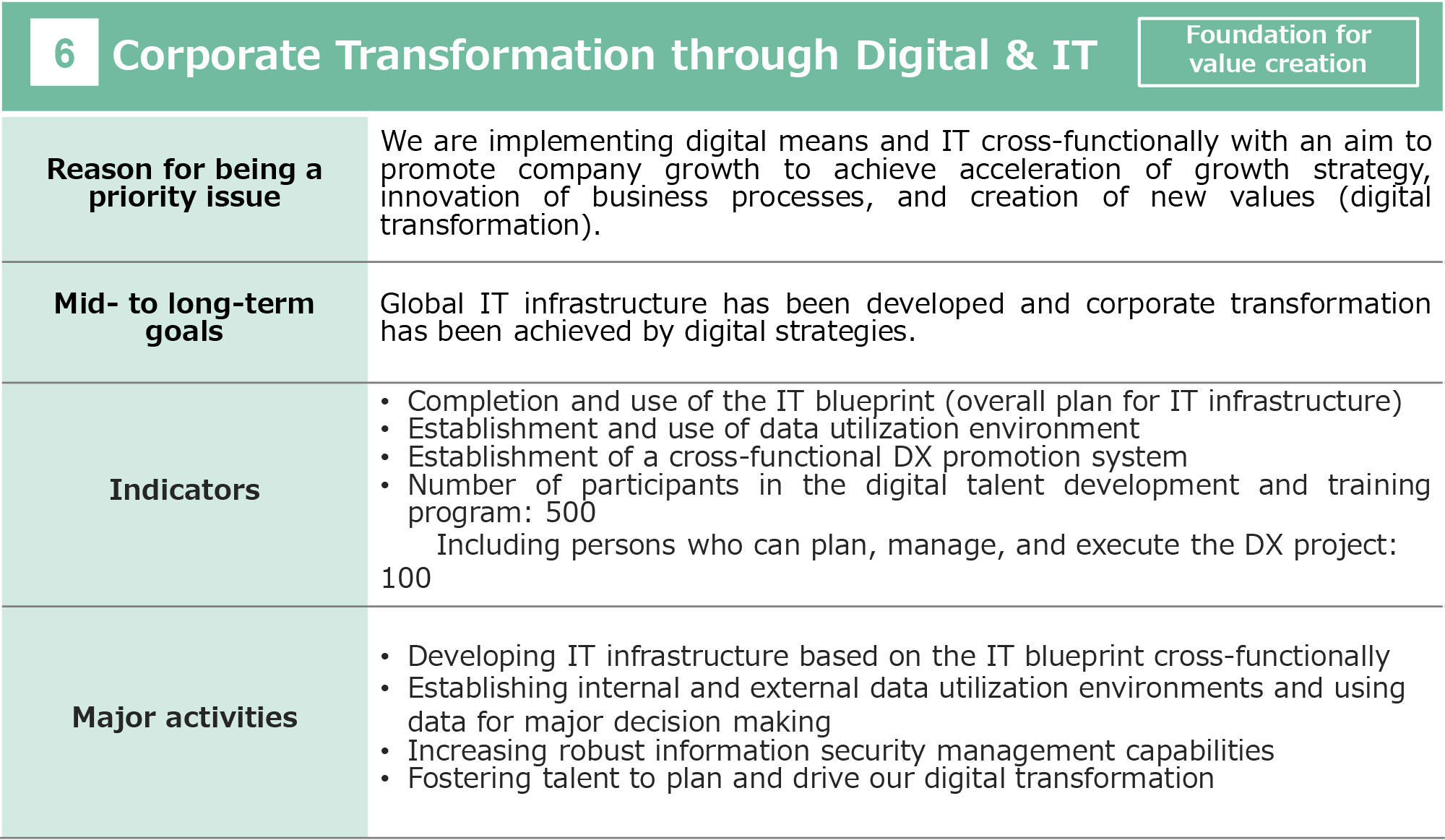 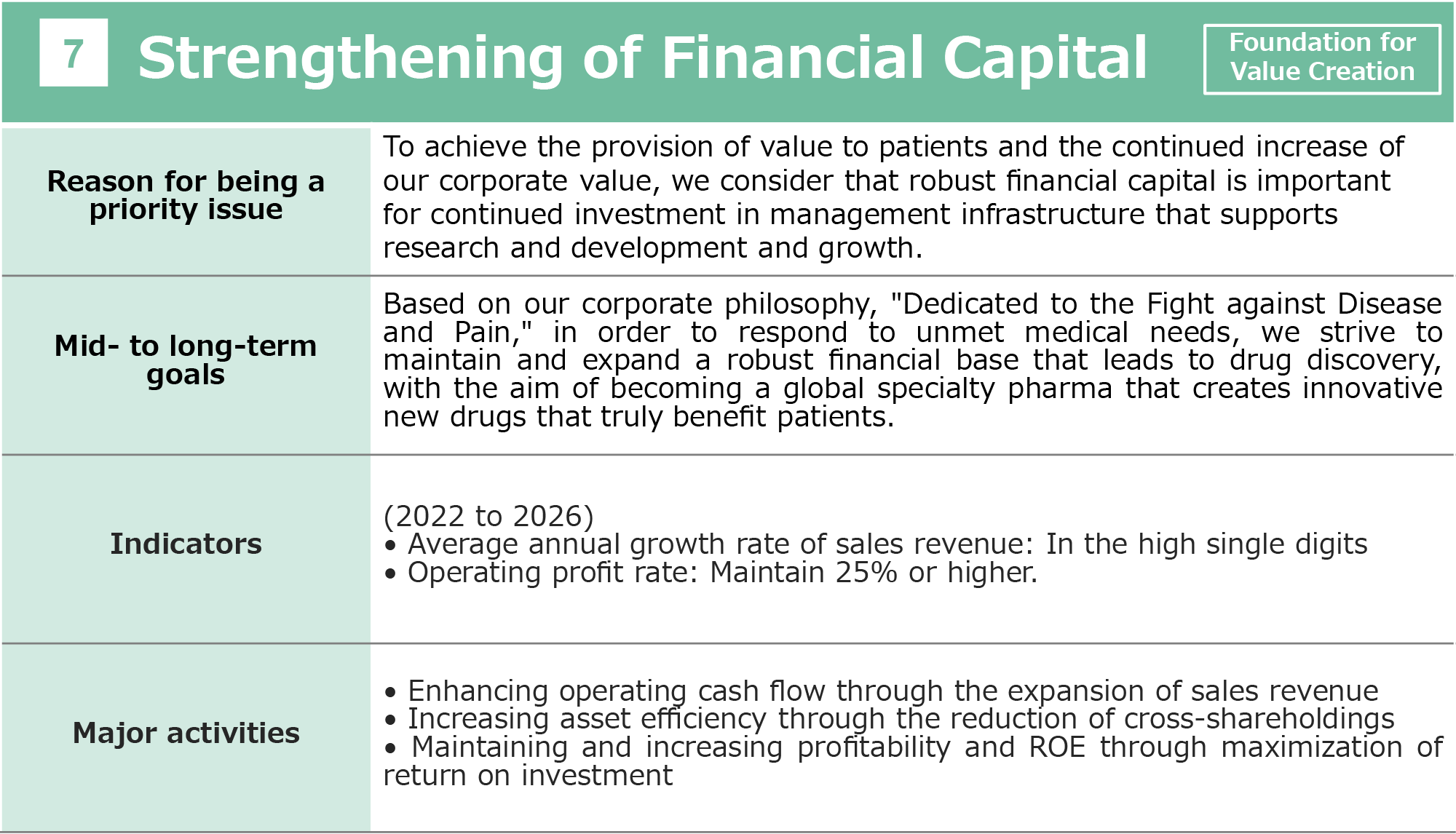 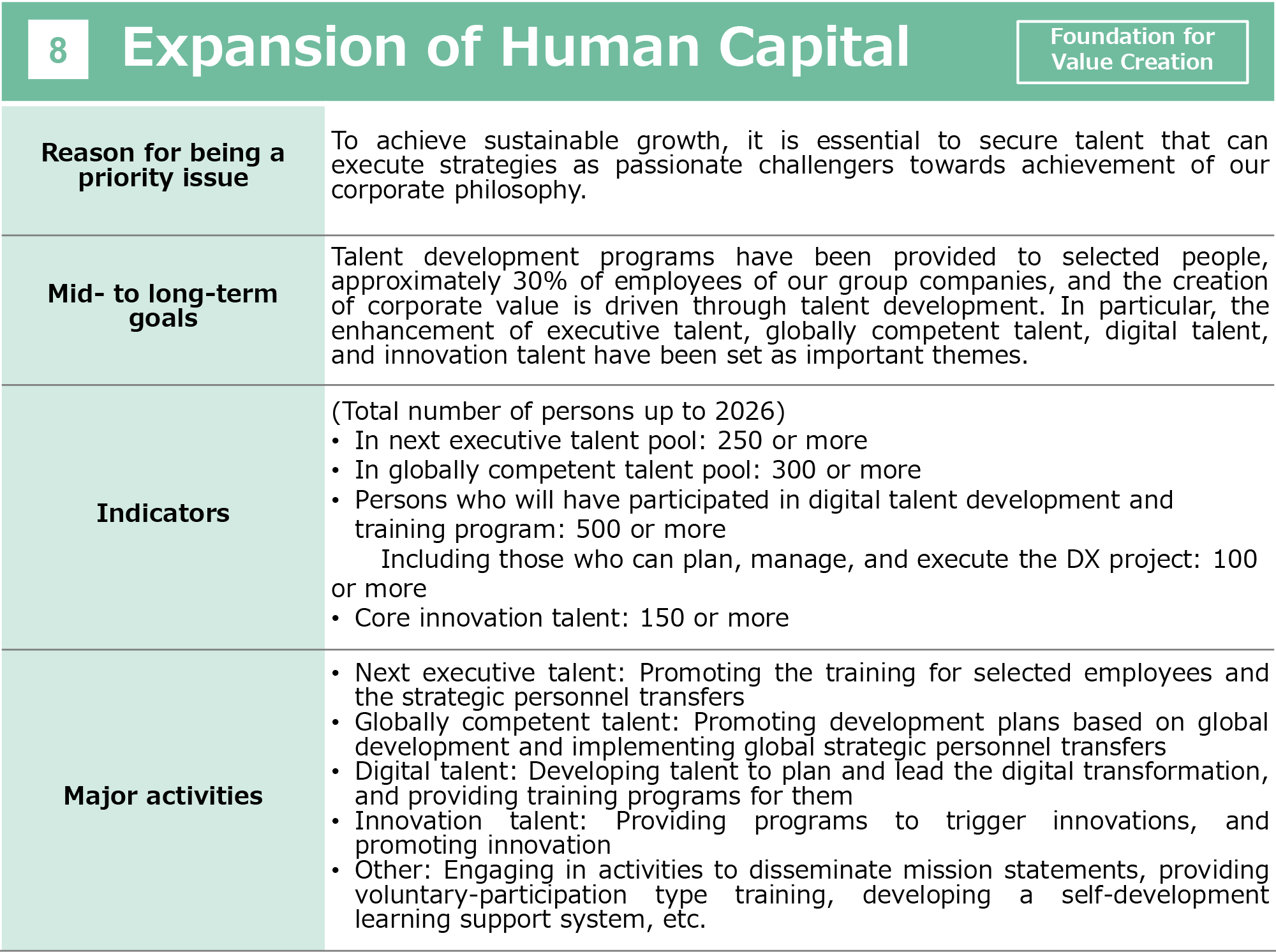 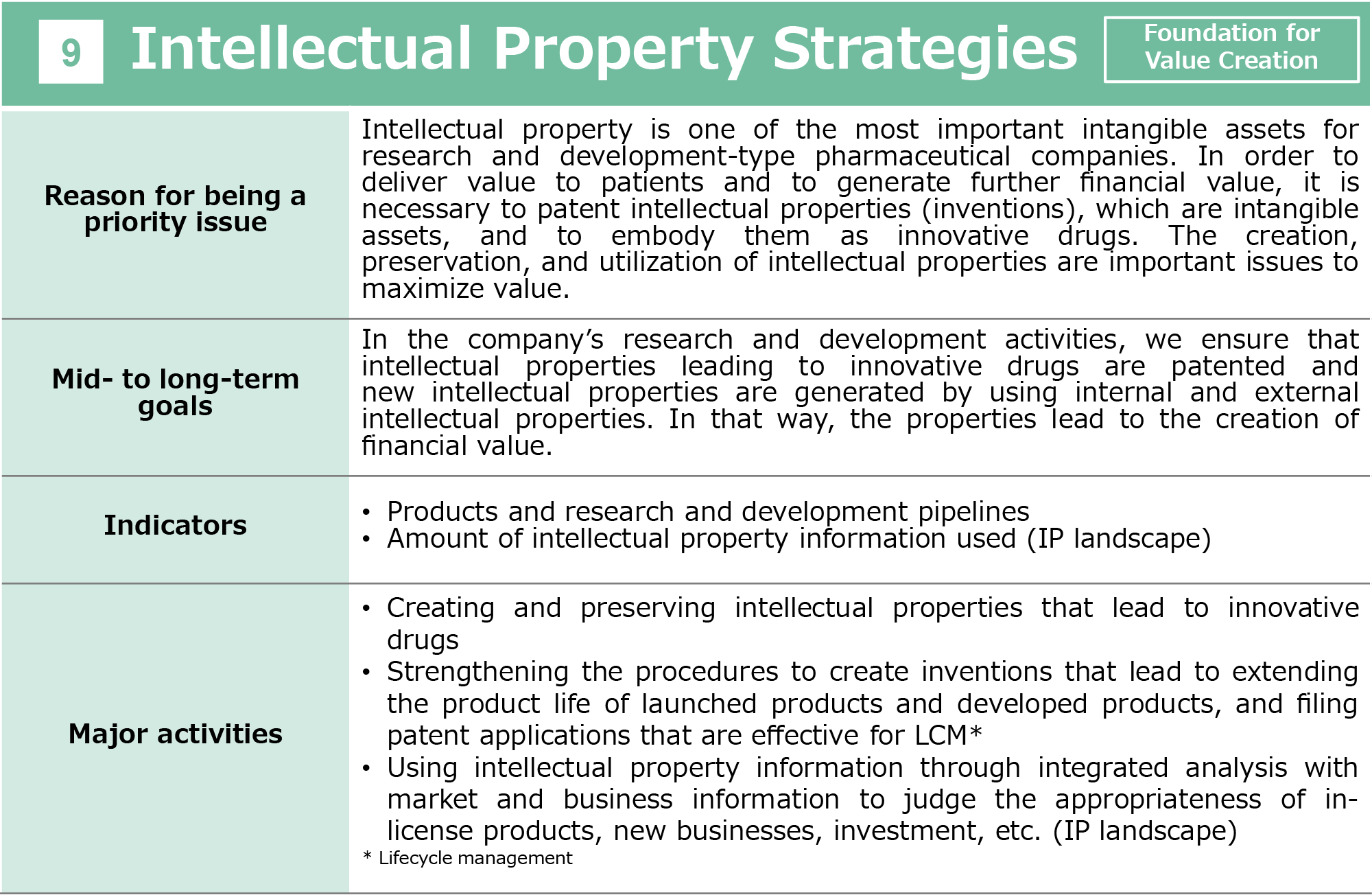 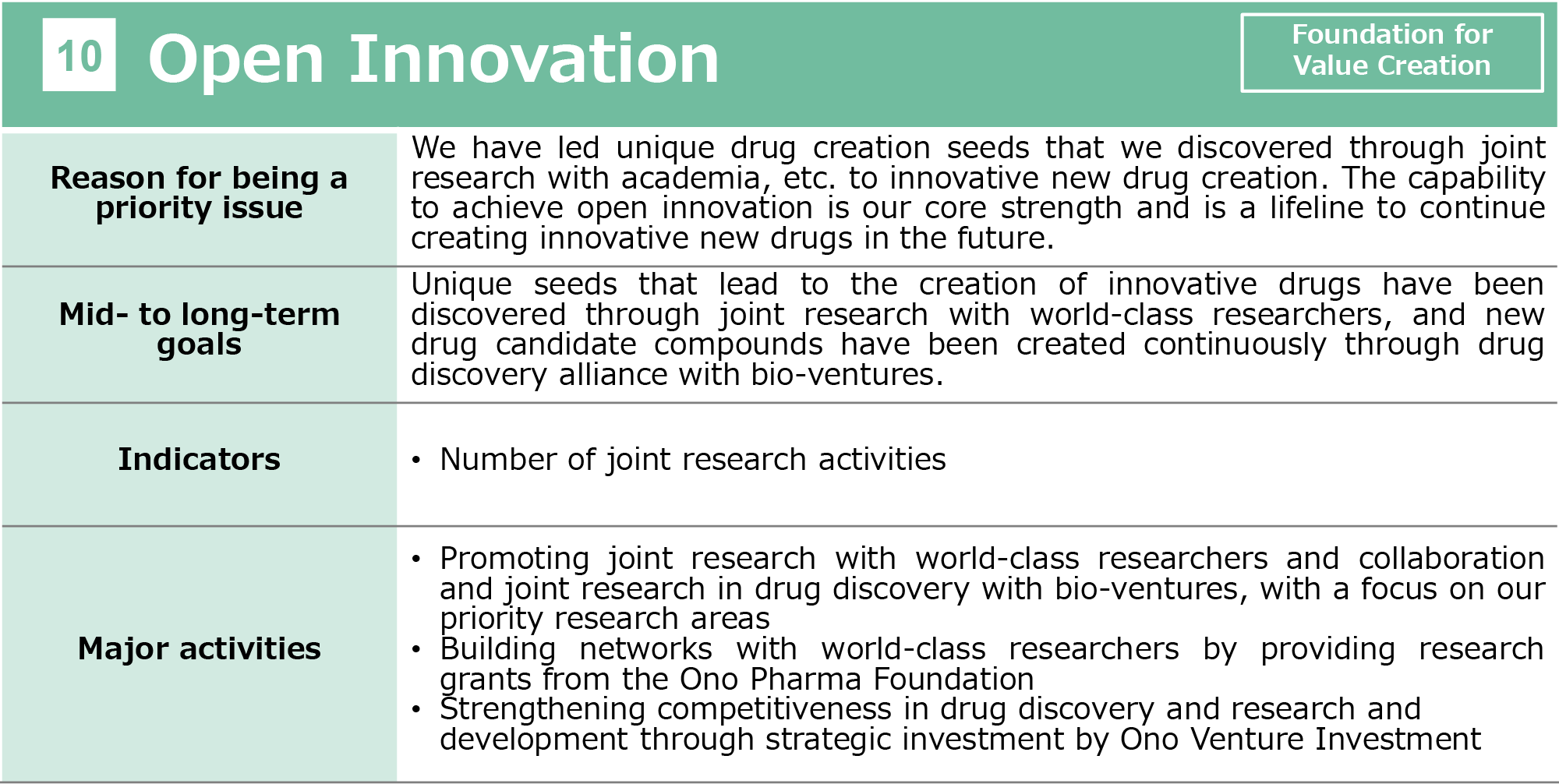 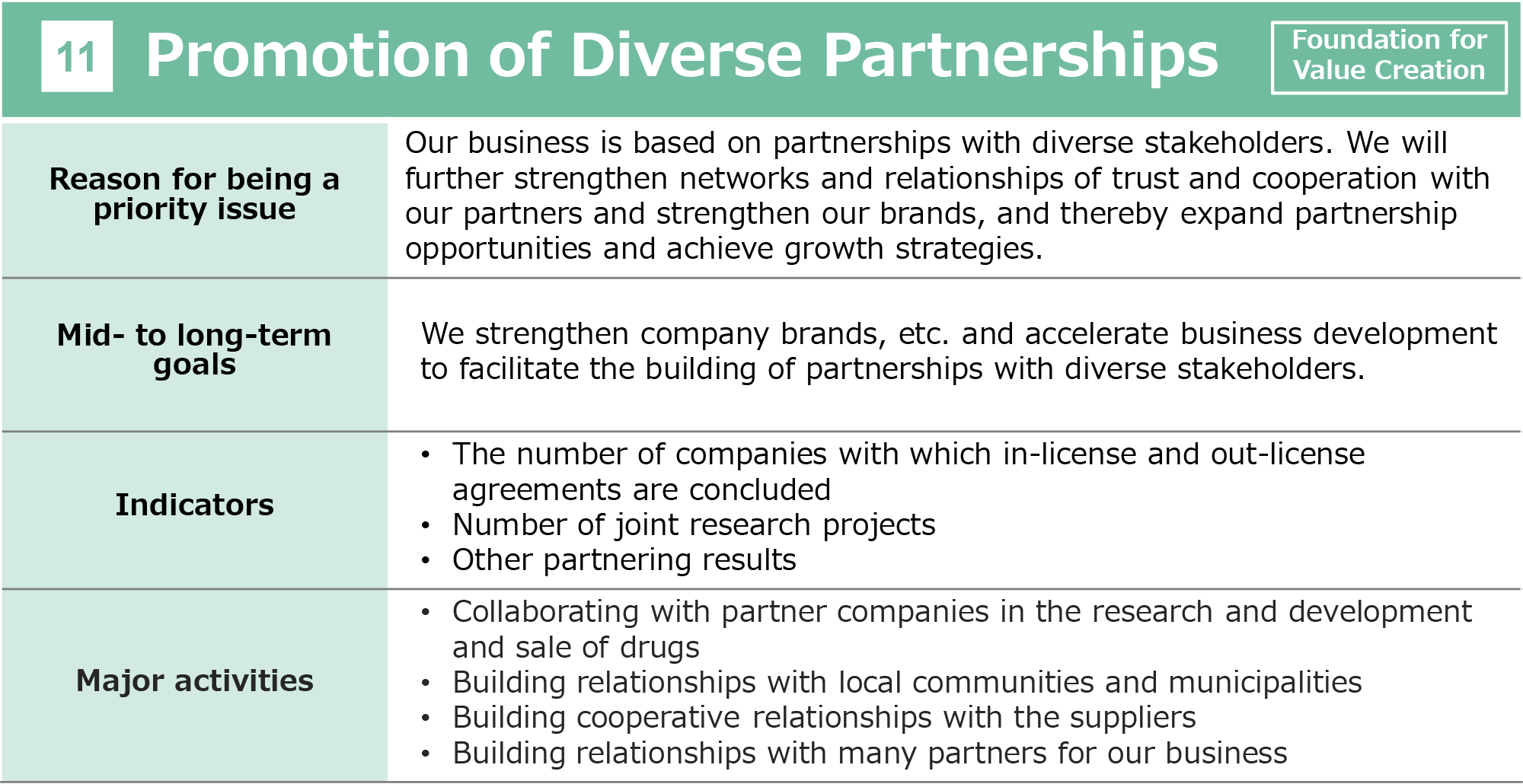 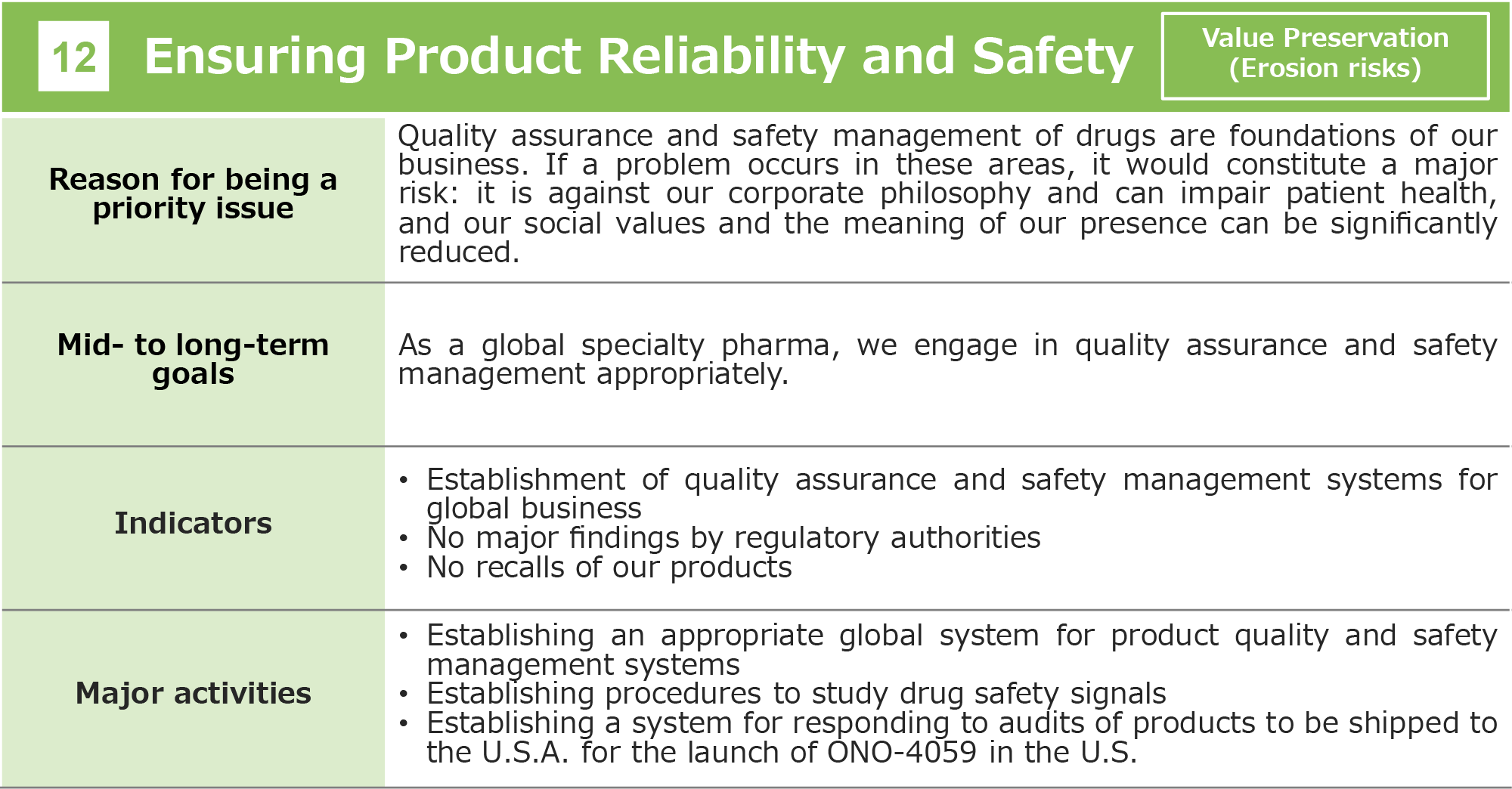 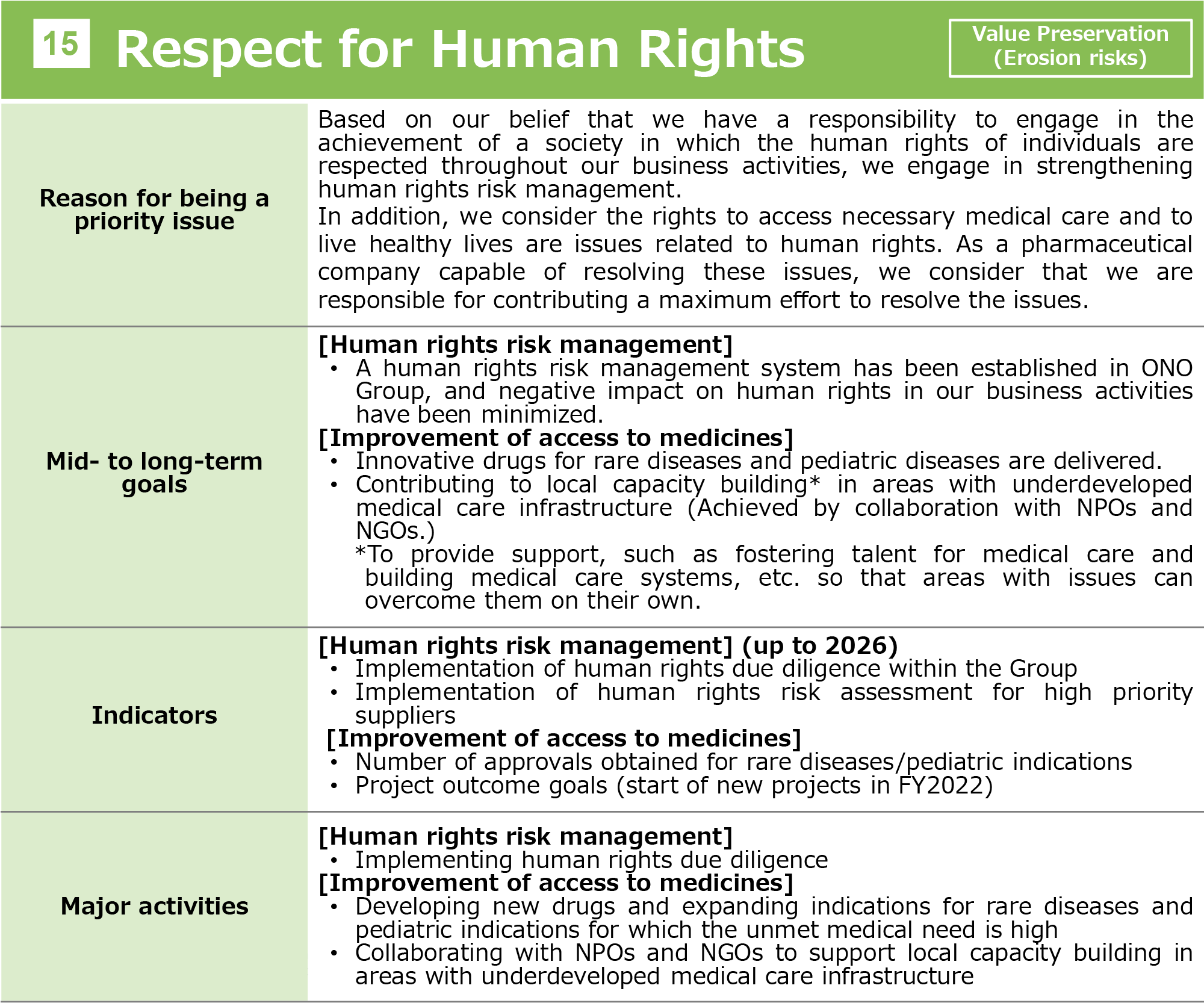 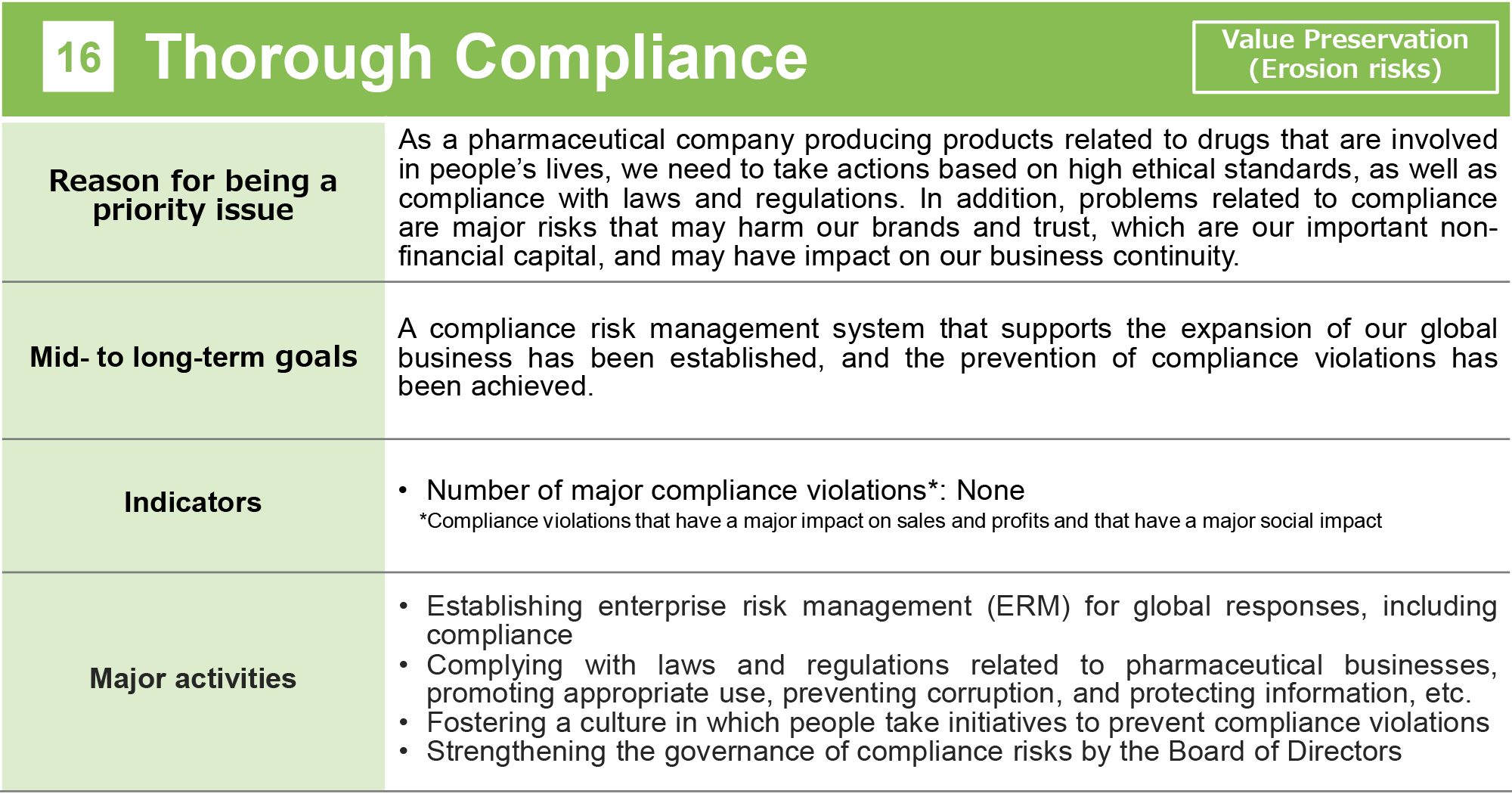 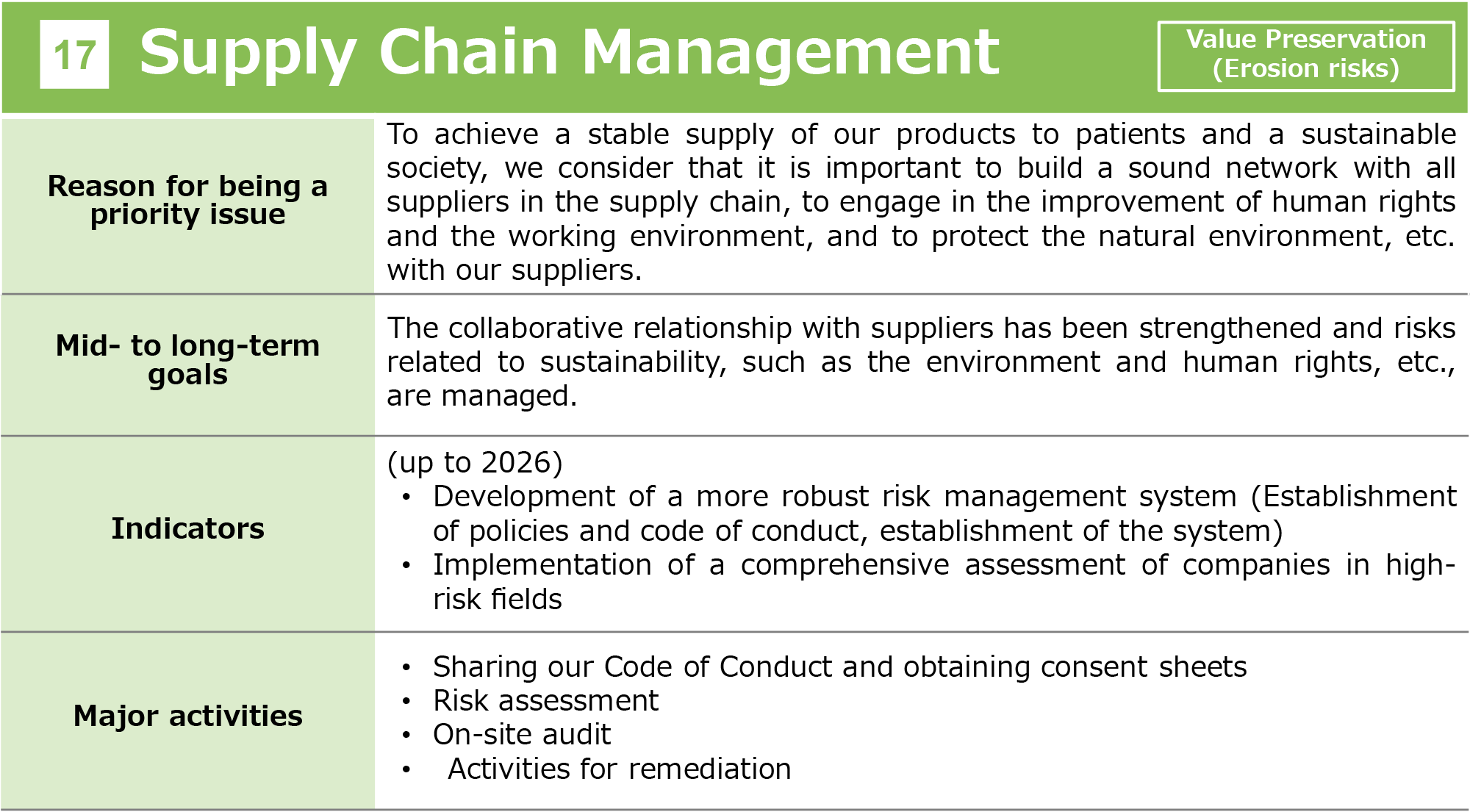 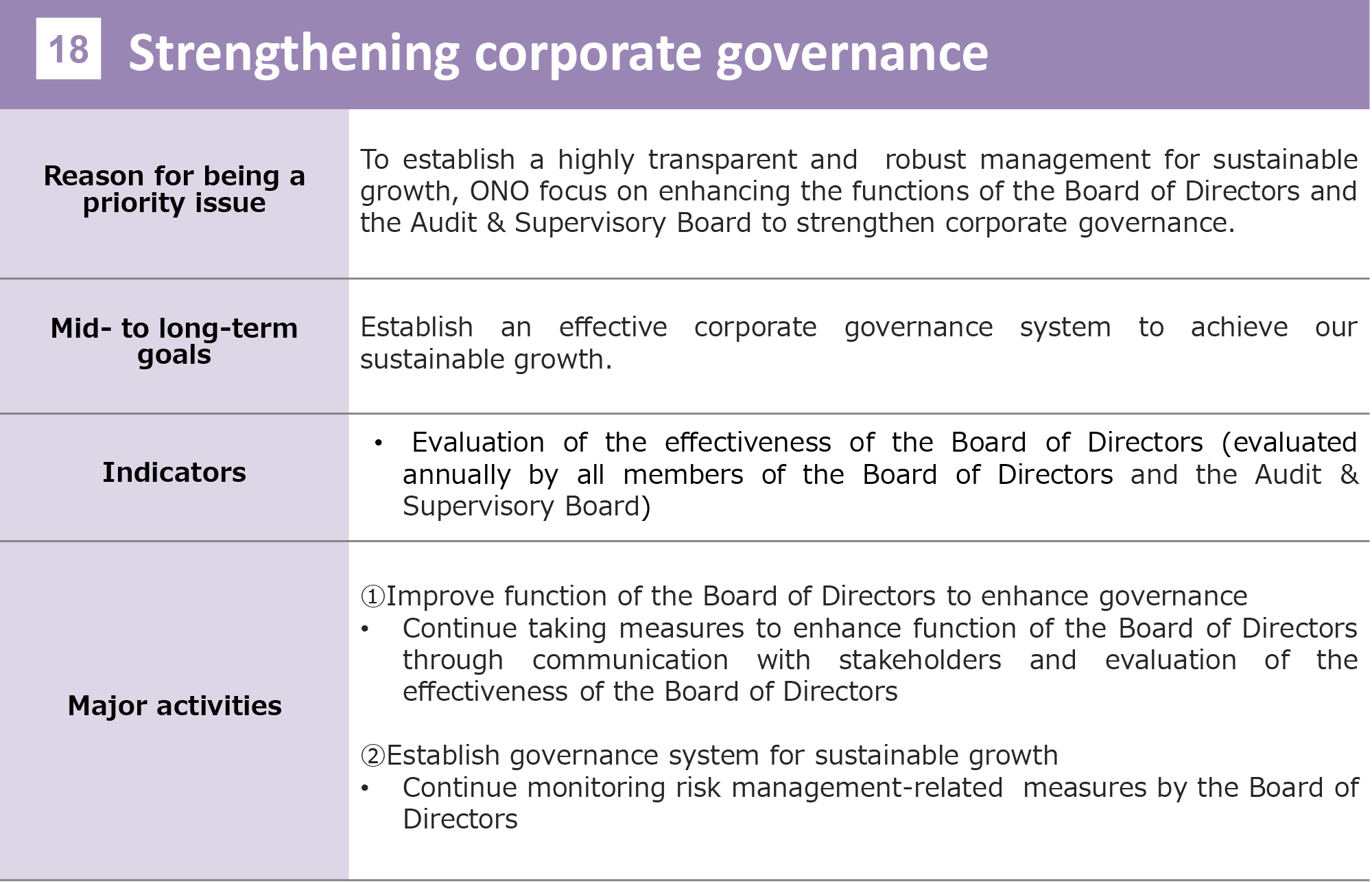 To promote CSR activities, we have the CSR Committee in place, chaired by the Corporate Executive Officer in charge of CSR / Head of Corporate Communications, with the President, Representative Director, and Chief Executive Officer serving as the responsible person. The Committee, which mainly consists of managers from various divisions, deliberates and makes decisions on important issues and subjects for CSR activities. The activities of the Committee are regularly reported to the management. Important matters requiring consideration and decision-making by the management and further important subjects are reported to and discussed at the management strategy meeting and by the Board of Directors, respectively. 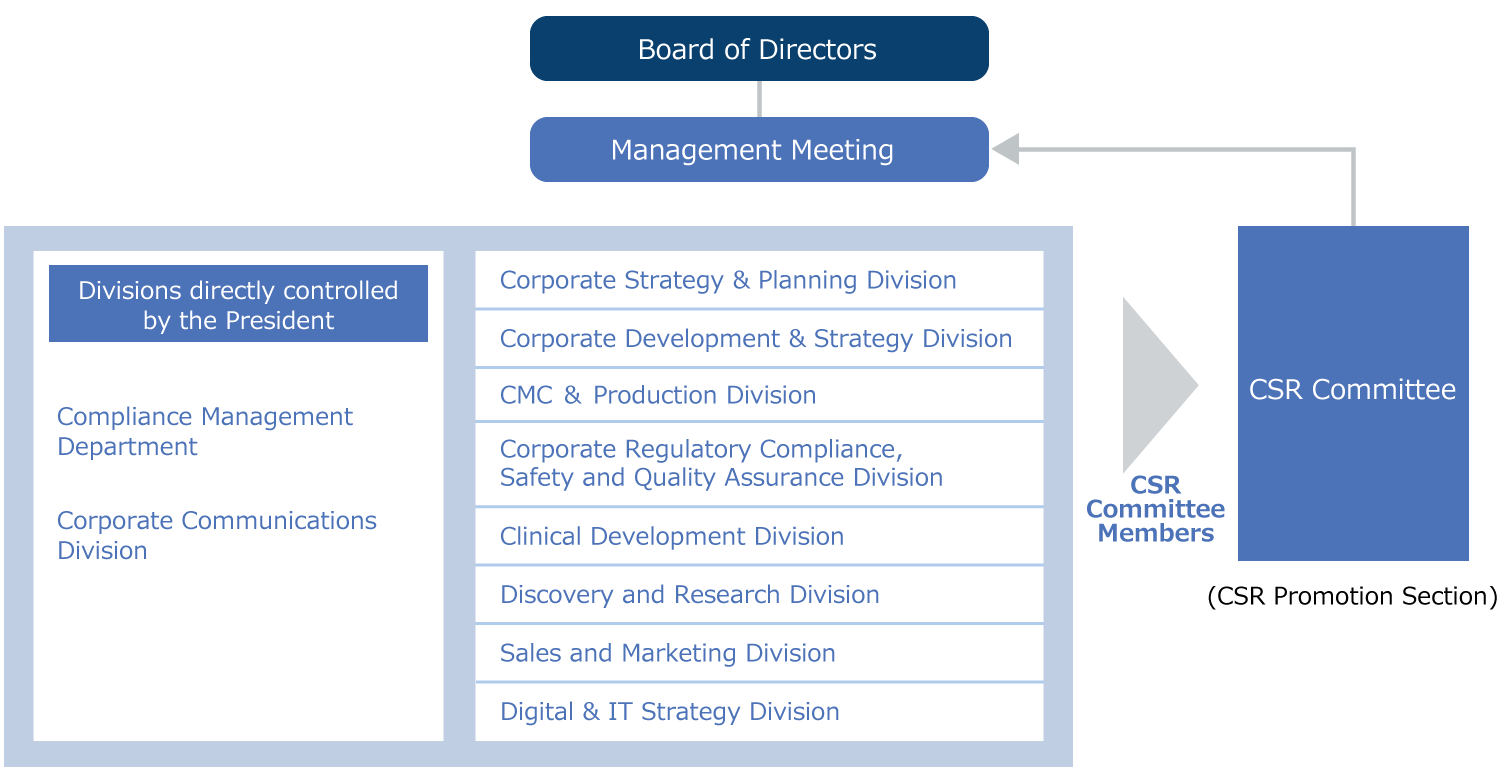 In November 2017, we participated in the United Nations Global Compact (UNGC), which is composed of 10 principles advocated by the UN concerning human rights, labour, environment, and anti-corruption. We comply with relevant laws and disseminate the Ten Principles of the Global Compact through our daily activities to ensure that all employees follow them.

The Ten Principles of the UNGC

Our Contribution to the SDGs

Contribution by ONO to the SDGs

We contribute to Goal 3, Goal 9 and Goal 17 in the SDGs through the creation of innovative drugs.

We strive to realize Goal 3: Ensure healthy lives and promote well-being at all ages as a research and development company specializing in prescription drugs based on our corporate philosophy to be dedicated to the fight against disease and pain. In response to the mortality rate of non-communicable diseases raised as a goal of the SDGs, we began to concentrate our research area into diseases such as cancers, immunological diseases and central nervous system disorders to contribute to the creation of original and innovative therapeutic medications for diseases for which medical needs have still not yet been satisfied. Furthermore, in addition to aid for diphtheria, whooping cough, diphtheria toxoid and tetanus toxoid vaccines as well as the hepatitis B vaccine to address infectious diseases, ONO contributes to therapeutic medications with low marketability, such as malaria, tuberculosis, neglected tropical diseases, as well as to development of new therapeutic medications, such as vaccines and diagnostic pharmaceuticals, through participation in the Global Health Innovative Technology Fund.

Moreover, we cannot separate ourselves from the duty to promote innovation or from Goal 17: Strengthen the means of implementation and revitalize the global partnership for sustainable development. We will not only provide innovative drugs independently but also seek out and achieve a wide range of partnerships. Long before “open innovation” became a commonly used phrase, ONO advanced the development of new drugs through the use of state-of-the-art technology and expertise from various fields worldwide. At the same time, we have been actively working to introduce and draw on new candidate compounds for pharmaceuticals. In addition to alliances with venture companies and other pharmaceutical companies, we form partnerships with a wide range of stakeholders from universities and research institutes to government agencies, local communities and NPOs in an effort to resolve problems via open innovation. A list of our main partnerships can be found here.

We have to ensure legal compliance, corporate governance, and transparency. We believe that we also have to build and continue strengthening relationships with all stakeholders through business activities respecting their interests and dialogues with them, to attain sustained growth toward becoming a Global Specialty Pharma.
We adhere to the policy of promoting communication/constructive dialogues with all stakeholders including patients, healthcare professionals, shareholders, investors, suppliers, local communities, employees, relevant governmental agencies, and industrial associations, and disclosing to them necessary information accurately, fairly, impartially, and promptly.

As an R&D-based pharmaceutical company, we will understand the expectations of stakeholders, and continue to meet various challenges that face us to become a company undergoing growth in middle and long term.

Activities with the Local Government

On November 12, 2021, we concluded an agreement with Osaka Prefecture on cooperation and collaboration for the promotion of health promotion among residents in Osaka prefecture.
The public and private sector work together to solve social issues through cooperation between government initiatives and CSV*1 activities by private company. We have been promoting "Dialogues with local communities" as one of an important theme of our business activities. As a pharmaceutical company headquartered in Osaka prefecture, we will continue to cooperate in promoting the health of the residents in Osaka prefecture by working together with Osaka Prefecture to solve social issues related to health, taking advantage of the mutual strengths of the government and company.